The morning of October 31st we left San Diego for Cabo San Lucas with the Baha Ha-Ha Rally. Captain Paul Wright joined us as crew for the trip. We were incredibly grateful he was able to join us as this was India’s first overnight passage and we were quite sure how she was going to handle it. (She handled it like a pro) 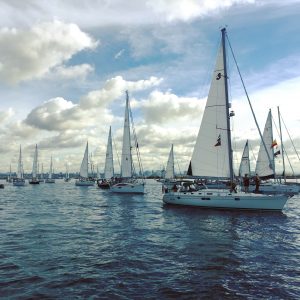 There was a rolling start in San Diego due to light winds. A few hours after the official start they stopped the rolling start and everyone turned off their engines and started putting up their light air sails. We hoisted the Parasailor in light wind and headed almost directly to Turtle Bay under sail.

As the evening progressed, the winds picked up a little. The swell picked up but remained consistent and on our stern or quarter. Paul took the first watch, I took the second and Ryan took the third. When Ryan was on shift he noticed our brand-new Parasailor was damaged. He snuffed it and we continued on with white sails. The weather continued to give us a nice push all the way to the anchorage in Turtle Bay.

Anchoring in Turtle Bay was quick and easy compared to some of the places we have attempted to drop our hook. We only had to set it once. There were two Fountaine Pajots in the bay. We lowered the dinghy and buzzed over to them to ask them about their boats. It’s still a little odd seeing all the catamarans around us. We are so used to be the only cat around. After our little detour to see the other Fountaines we headed to shore.

My first land fall in Mexico was on the beach in Turtle Bay. The surf was pretty mild and there was always someone willing to help you land your dinghy for a dollar or two. The rule was $1 for landing the dinghy and another $1 when we return for watching the dinghy. This system seemed to work well for each landing.

The highlights of Turtle Bay:

There were a lot of restaurants in Turtle Bay which appeared to exist only for the Ha-Ha.

The morning of the November 5th we left on Leg Two.

Turtle Bay to Santa Maria was a partial motor. We lost our wind over the first night and kicked on an engine to push us the rest of the way. While we weren’t moving as fast as leg one, we made good time and Ryan and Paul managed to reel in a few fish. 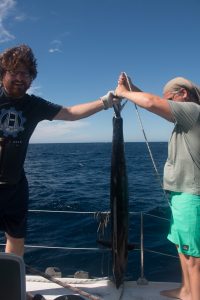 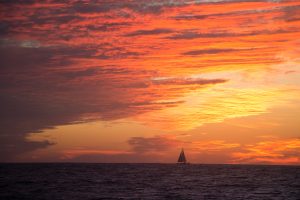 Another Ha-Ha boat and a spectacular sunset as we made our way to Bahia Santa Maria. 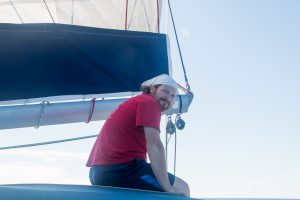 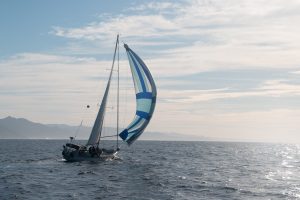 Our friends from Black Watch trying to catch some wind.

The first fish was a tuna. Fish number two was a giant wahoo. (we threw him back because there was no way we could eat him) Fish three was a marlin. The marlin outran the boat, turned back and took 180 yards of line with him before we lost the line. We discovered fishing is really useful for breaking the monotony of a long passage. We also decided we are going to need more fishing gear.

We approached Santa Maria at night. The bay is surrounded by shoals and fishing boats. Paul and I stood on the bows with lights to make sure we were visible and weren’t going to catch any lobster pots. This process was made more nerve-wracking by the flying fish whizzing by. After an hour we cleared all charted obstacles and dropped our hook.

Upon waking we discovered a large bay with warm turquoise blue water. I was the first to jump in. Ryan followed soon after. The water was wonderful. It felt like I was on vacation. We swam that morning before India invited all the kids over to swim. Before we knew it, Waponi Woo was overrun with kids. 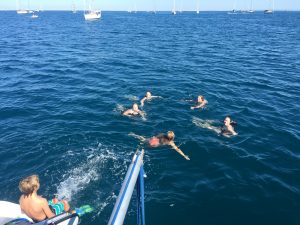 The gaggle of kids swimming at Bahia Santa Maria.

The next morning Ryan replaced some zincs and we headed to shore for the beach party. India spent most of our time here making new friends. I could have stayed longer.

On the last night we picked up two additional crew members. Kelly and Bill were on a boat with some engine and electrical issues. They had a plane to catch in Cabo and were concerned they would miss it so we invited them along. 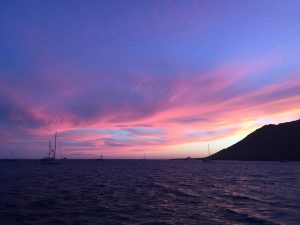 Our final trip to Cabo San Lucas was a long motor with no wind. We did catch some additional fish. Fish four and five were tuna that we reeled in at the same time. Fish number five, and the final fish we caught, was a dorado. We threw the dorado back before he lost his pretty color. 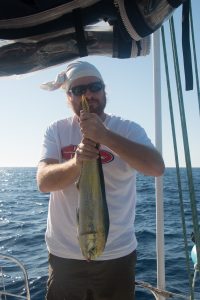 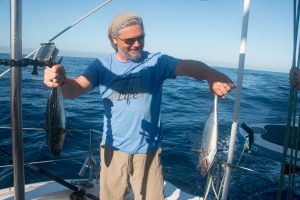 The afternoon of day two we were anchoring in nine feet of crystal clear water and white sand off the beach of Cabo San Lucas. 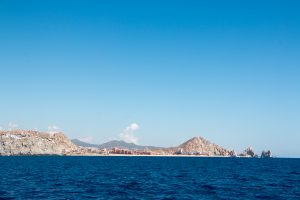 Cabo San Lucas is just around the corner. The water really is that blue.

Cabo was like Vegas. After the first day, the anchorage became really rolly. We swam to the beach on the second day and had a very exciting panga ride back. I have bruises from getting into the panga and just about had to leap back onto the bucking boat. We decided to head out after two nights in Cabo; there was a storm coming we wanted to avoid and none of us were really impressed with Cabo.

We left Cabo under sail. After completing our first tack, we turned on an engine as we were headed into the wind. Our SOG was 1.8nm/h. We were going to have to run both engines to get through this; my fuel numbers had assumed we would be running on one engine the majority of the last leg. I decided we needed to head back to San Jose Del Cabo for fuel.

A few hours later we pulled up to the fuel dock in San Jose Del Cabo and filled our tank and jerry cans. The marina here was pretty quiet and empty. In just a few days the marina would be rafting boats together to get out of the weather. At this point we lost about five hours from doubling back and were ready to head out. It was also at this point the port engine decided not to start.

It was hot; there was no wind in the marina. Paul did some trouble-shooting in a hot engine compartment while a marina employee paced in front of us. Forty-five minutes and a hammer got the engine started. We headed out back into the weather. The rest of the trip was a beating. 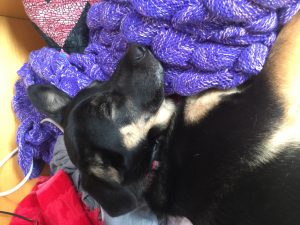 Rover being done with passages.

The wind was 20-25 on the nose. Paul and India had an opportunity to become intimately familiar with bridge slap and we all battled varying degrees of seasickness. We pulled into La Paz ready for rest.

We would like to give a special thank you to Paul for all of his help!